I am delighted to be celebrating the traditions of the north east coast with artist Lizzie Mcdougall.

The ceilidh of songs, stories and music on the 25th of September marked the completion of Lizzie's new artwork inspired by her research along the coastline of Scotland's far north, the east coast of Caithness, Sutherland, Ross and Moray.

She has been collecting oral traditions in communities up and down the seaboard, using these as the basis for artwork rendered in applique in collaboration with community members and presented in the form of a 'Ceilidh Quilt' worked on with Brenda Sanders . This is the second such quilt Lizzie has produced, her first featuring images gleaned from stories from mainland Ross-shire.

This particular work is especially dear to my heart as it includes an image of MFV Primrose INS291, which was the boat owned by my father-in-law and latterly my husband, representing the stories he told of his experiences in the 20th century herring fishing.

The celebration launch was be a combination of song, story, music and hospitality - in the convivial form of tea and baking. 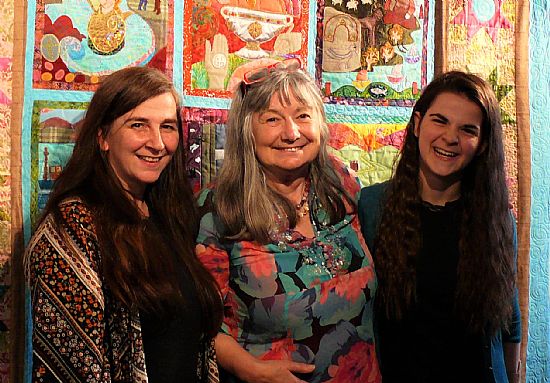